This is Nick, producer at Mutant Studios, back with more about our work on Shadow of the Leviathan. We have some big changes coming up, many of which we’ll announce next week, but this week was another Lobster-filled week.

This week, we’ve been hard at work with models, documents, and a lot of logistical considerations.
---
MAKE IT MORE DISGUSTING!
---
The process for art in this game is a unique one, especially for the current Leviathan. The Lobster is a tortured and angry soul so it’s visuals and design are equally as tormented. Screws tightened to it’s flesh and shell, armor plates mashed against it with reckless abandon, and exposed injuries from conflict. This thing has to have history.

So when Sarah calls me over to review something, our discussions often revolve around making the poor thing look MORE beat up and disgusting. It’s quite fun. The majesty of the Leviathans is in their scale, but up close they really do need to look intimidating and we want them dripping with detail.

Here’s a sneak peak on what that looks like at the moment. The details will need some texturin’ and Z-Brushin’ so that will be following quickly! 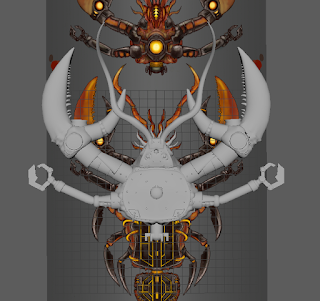 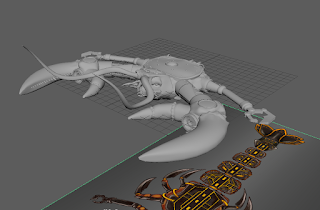 ---
SECRET PROJECT
---
While we work on Shadow, we’re taking a slight detour as we rally our Kickstarter together. We’re excited to announce [REDACTED] - a [REDACTED] adventure about [REDACTED]!

It’s a new approach for us to put out a game like [REDACTED], so we’re excited to see how it goes! We’ll be putting out an official announcements and trailers for [REDACTED] in the coming weeks, so look out for news about [REDACTED] soon!


---
NEXT STEPS
---
We have our assets and tasks planned out, a lot of it is juicin’ our visuals and bringing the look together so we can show off our style!
---
STAY ONBOARD!
---
More Shadow of the Leviathan updates will be coming steadily as we work, so follow us on Twitter to get different development updates or subscribe to the Mutant Studios newsletter to get updates there.

We’ve also introduced a Mutant Entertainment Studios DISCORD channel, to keep you (yes you!) in touch with other Mutant players and as another platform for us to share things with you. Check it out.

We’ll also be reaching out for playtesters, general feedback, and doing other fun things on Twitter so be sure to follow us for all of that!

Thanks for joining us on this adventure. We can’t wait to get it into your hands!